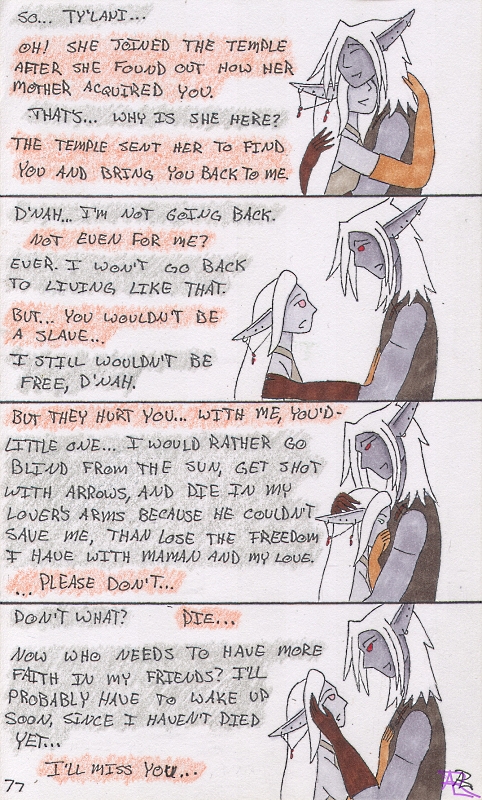 "So... Ty'lani..." He knew his sister probably had something to do with the situation that brought him here.

"Oh! She joined the temple after she found out how her mother acquired you." She snuggled close to him, butting her forehead under his chin the way she had before he'd been taken.

"That's..." He'd told Ty'lani himself several times how her mother had come to posses him, figures she hadn't believed him until after her mother sold him to someone else. "Why is she here?"

"The temple sent her to find you and bring you back to me." His joy at seeing her bled away and he pushed her away from him enough that he could look her in the eye.

"D'nah..." The confusion in her pale eyes made him falter. "I'm not going back."

"Not even for me?" Her confusion became disbelief as he shook his head at her.

"Ever. I won't go back to living like that."

"I still wouldn't be free, D'nah." Tears filled her eyes and she pressed against him.

"But they hurt you..." She shook slightly in his arms, fighting back her tears. "With me, you'd-"

"Little one..." Her stopped her before she could get going to far, stroking her hair, a gentle smile curling his lips. "I would rather go blind from the sun, get shot with arrows, and die in my lover's arm because he couldn't save me, than lose the freedom I have with Maman and my love." She sniffled softly and was quiet for a moment.

"Die..." He smiled and pushed her away again, gently smoothing her hair away from her face.

"Now who needs to have more faith in my friends? I'll probably have to wake up soon, since I haven't died yet..." She stared at him quietly, trying to come to terms with being denied what she'd wanted.